Straining Towards the Goal 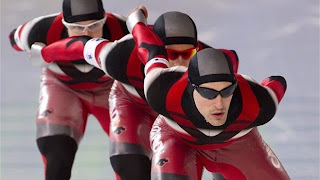 Here is the Apostle Paul’s ministry philosophy stated in Philippians 3:13-14, “Brothers, I do not consider myself yet to have taken hold of it. But one thing I do: Forgetting what is behind and straining toward what is ahead, I press on toward the goal to win the prize for which God has called me heavenward in Christ Jesus.“ (NIV)

What is your philosophy towards the future in fulfilling your life goals? As the 2010 Vancouver Games concluded, there were many things that I personally learned and experienced. Primarily, it has united a country towards one goal and purpose where many might see as trivial. Yet one way or another, the games has done more good than bad to this adopted country of mine. To this I say, I am proud to be Canadian. Furthermore, it provided an opportunity to appreciate its national anthem even more. It was sung many times over during these past two weeks than any other. It was an anthem of prayer for “God keep our land” and declared by many echoing in the different time zones and regions. Truly, something wonderful happened that the whole world noticed it.

Having such a perspective unifies purpose and goal that builds a nation and people. But most importantly, it builds an individual to pursue greater things as well. The Apostle Paul is such an individual that we can all emulate in our time. In this opportunity to host the world in these games, Canada adopted a call to all to “Own the Podium” program that many poked at being too serious. This is exactly an echo of what Paul declared for himself. And this was the reason why Canada broke the record for having the most number of gold medals earned by any host country and from all Winter Olympics in the past. This was the fruit of such declaration and intention.

One aspect that piqued my interest was in the area of Long Track Speed Skating Men’s Team Pursuit that produced gold against USA was “The Push.” Here’s the story behind it: Skating against the United States in the gold-medal race, the Canadian team brought out their secret weapon - a speed skating tactic called The Push, which was kept under wraps for three years in preparation for Vancouver. The Push, in which each skater gently nudges the teammate in front of him at key times to keep the group from losing momentum, helped down the United States by a mere 0.21 seconds. It was, as Canadian coach Marcel Lacroix would later describe, the difference maker. "It's very subtle, you don't really see it, but it was so effective today it was stupid," the coach said after the race. After the race, Makowsky described the strategy as a slight push coming out of each corner, where the front skater tends to lose momentum due to air resistance. The skaters drafting behind him provide momentum with the third skater pushing the second, and the second pushing the first. "It was something that we worked on. It really helped us today, especially in those last couple of laps when we were all getting tired," Makowsky said. "It's definitely not something you can pick up overnight, that's why we've been practising it."

This is exactly what the Apostle Paul was talking about and doing to pursue his goal and to attain the ultimate heavenly prize reserved for him by God. It cannot be attained overnight but must be practiced until it becomes a natural part of life. It should not be based on a theory but must be embedded in the mindset and actions. In order to reach the goal, nothing and no one should become a stumbling-block but a stepping-stone to propel you towards the prize. It is always a journey not an excursion. And only the persistent and disciplined prevails. The only difference between gold and silver was a mere 0.21 seconds but it was considered as the difference-maker of the game. They strained towards the finish line with all their might and the push worked in their favor.

Whatever you are facing right now, God is behind you with His own brand of ‘The Push” for us to receive our prize in heaven when the time comes.