LESSONS TO LEARN FROM THE TITANIC 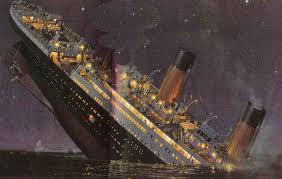 Just last month, the sinking of the Titanic 100 years ago was remembered in Halifax, Nova Scotia. Even after a century, many are still fascinated with the horrible events of its sinking and the ship itself named Titanic. It must be mentioned here that when the ship of the Titanic was built, it was to become the greatest achievement in the shipping industry of the time, but what went wrong?

Numerous experts start with overconfidence when they discuss the "unsinkable" Titanic. One author describes Titanic Arrogance. Here's an excerpt: “The first few years of the 20th century, when the Titanic was built, were full of brash optimism based on remarkable advances in science and technology. It was a time of peace, progress and endless promise. Things were getting bigger, better and faster—the age more opulent and prosperous. "What could possibly stop the engines of progress or the captains of industry at their controls?" the book's prologue asks. The Titanic thus embodied a spirit of invulnerability characteristic of the times. In fact, when at the beginning of her maiden voyage one of the deck hands was asked whether the ship really was unsinkable, he replied, "God Himself could not sink this ship!"

Daniel J. Lohrmann, Michigan's first Chief Security Officer (CSO) & Deputy Director for Cybersecurity & Infrastructure Protection (CIP) within the Department of Technology, Management & Budget commented, “Numerous theories still abound analyzing the never-ending question: "Why did it happen?" The very word "Titanic" has become synonymous with words like enormous, monumental, gigantic, massive, huge and immense. But most of us aren't picturing a monumental home run or an enormous successful product launch. No, the word Titanic has also been seared into our brains as a massive failure.”

The Scriptures provides us the absolute truth of what really happened a century ago: “Pride goes before destruction, a haughty spirit before a fall” (Proverbs 16:18, NIV). Let me share a story to illustrate it best, “The story is told of two ducks and a frog who lived happily together in a farm pond. The best of friends, the three would amuse themselves and play together in their waterhole. When the hot summer days came, however, the pond began to dry up, and soon it was evident they would have to move. This was no problem for the ducks, who could easily fly to another pond. But the frog was stuck. So it was decided that they would put a stick in the bill of each duck that the frog could hang onto with his mouth as they flew to another pond. The plan worked well--so well, in fact, that as they were flying along a farmer looked up in admiration and mused, "Well, isn't that a clever idea! I wonder who thought of it?" The frog said, "I did..."

Let us remember that our words will always come back to bless us or in the case of the frog, free falling towards the ground. Nothing is sure with what happened to the frog but I think it was not what he wanted to happen. Being careful to utter boastful claims even up to the point of challenging what God can do is a sure way to receive God’s reply: “God opposes the proud but gives grace to the humble” (James 4:6). Humility is the opposite of pride and this is what we need to uphold relentlessly. There will be a time for recognition and it will come at the right time not as we declare it to be.

History will always remember no matter what we have done, both good and evil. But the most important truth to remember is this: God has the last say to all that we will do and have done at the Judgment Day. Today, when I read the Our Daily Bread devotional article, I was reminded that, “We are nothing without Jesus, so give Him the credit.” When we begin to acknowledge God in our lives and recognize this basic truth, we will never surely go wrong. Allow me to share also what I personally hold fast in my own life and ministry as a way to bring my feet always on the ground is by simply abiding in this truth: “Honor God and He will honor you.” Men may give the best of all admiration and commendation, but nothing can compare to what God can give.