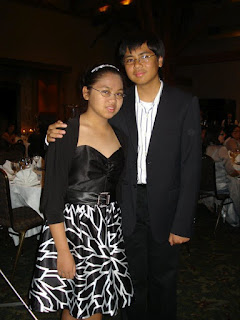 Let me begin by sharing this endearing story that I came across: “A director of one of the great transcontinental railroads was showing his three-year-old daughter the pictures in a work on natural history. Pointing to a picture of a zebra, he asked the baby to tell him what it represented. Baby answered "Coty." Pointing to a picture of a tiger in the same way, she answered "Kitty." Then a lion, and she answered "Doggy." Elated with her seeming quick perception, he then turned to the picture of a Chimpanzee and said: "Baby, what is this?" "Papa." It gave me smile when I read it and I know it made you smile as well.

Being a father of two teen-agers has brought me to another level of adjusting my relational mode of fatherhood to both of them. I am personally blessed with a 16-year old teen-age boy and 13-year old teen-age girl. They are both very precious to us for they were born into our family as God’s gift and blessing. As of this time, I have not asked them if their picture of me would be a “chimpanzee” and I’ll sure to ask them. However, I know that I am still in the process of being the father that my God wanted me to become for my children. Although, I know that I may not be the perfect Father but I’m trying my best to provide to my children what I can as their best Father in all aspects of their life.

The mandate of fathers can vary from culture to culture. But the Scripture provided a very specific mandate for all fathers to remember as the apostle Paul exhorted: “Fathers, do not provoke your children to anger, but bring them up in the discipline and instruction of the Lord” (Ephesians 6:4 ESV). It is in direct parallel to Proverbs 22:6, “Train up a child in the way he should go; even when he is old he will not depart from it.” Simply stated, the mandate of every father today has not changed as God Himself prescribed then and for tomorrow i.e., to provide the foundational principles of discipline and instruction in the ways of God for the sole purpose of preparing them to become what God intends them to be. With this in mind, fathers become co-managers of God’s purpose in their children’s life.

By not knowing this mandate would jeopardize the whole fatherhood principles that God set for His glory and purpose. God is our God and also our Father in Heaven. Fathers have a huge responsibility to represent the fatherhood conscientiously as a direct reflection of God as our Father. A father that has a direct personal relationship with God will never go astray in representing God to his children and it will become evident in their children’s view of life and death. Here’s a story that would best illustrate it: “A devoted father came into the room where his eight-year-old was dying of an incurable disease. The child, sensing that he was not going to get well asked his father, "Daddy, am I going to die?" "Why, son, are you afraid to die?" The child looked up into the eyes of his father and replied, "Not if God is like you, Daddy!"—(Sunday School Times).

What kind of fathers do we need to become? Allow me on this special topic to share a gospel parable of the prodigal son to show the clear mandate of what being a father is all about (take special note of the underlined statements for fathers to remember): “And He said, There was a certain man who had two sons; And the younger of them said to his father, Father, give me the part of the property that falls [to me]. And he divided the estate between them. And not many days after that, the younger son gathered up all that he had and journeyed into a distant country, and there he wasted his fortune in reckless and loose [from restraint] living. And when he had spent all he had, a mighty famine came upon that country, and he began to fall behind and be in want. So he went and forced (glued) himself upon one of the citizens of that country, who sent him into his fields to feed hogs. And he would gladly have fed on and filled his belly with the carob pods that the hogs were eating, but [they could not satisfy his hunger and] nobody gave him anything [better]. Then when he came to himself, he said, How many hired servants of my father have enough food, and [even food] to spare, but I am perishing (dying) here of hunger! I will get up and go to my father, and I will say to him, Father, I have sinned against heaven and in your sight. I am no longer worthy to be called your son; [just] make me like one of your hired servants. So he got up and came to his [own] father. But while he was still a long way off, his father saw him and was moved with pity and tenderness [for him]; and he ran and embraced him and kissed him [fervently]. And the son said to him, Father, I have sinned against heaven and in your sight; I am no longer worthy to be called your son [I no longer deserve to be recognized as a son of yours]! But the father said to his bond servants, Bring quickly the best robe (the festive robe of honor) and put it on him; and give him a ring for his hand and sandals for his feet. And bring out that [wheat-]fattened calf and kill it; and let us revel and feast and be happy and make merry, Because this my son was dead and is alive again; he was lost and is found! And they began to revel and feast and make merry. But his older son was in the field; and as he returned and came near the house, he heard music and dancing. And having called one of the servant [boys] to him, he began to ask what this meant. And he said to him, Your brother has come, and your father has killed that [wheat-]fattened calf, because he has received him back safe and well. But [the elder brother] was angry [with deep-seated wrath] and resolved not to go in. Then his father came out and began to plead with him, But he answered his father, Look! These many years I have served you, and I have never disobeyed your command. Yet you never gave me [so much as] a [little] kid, that I might revel and feast and be happy and make merry with my friends; But when this son of yours arrived, who has devoured your estate with immoral women, you have killed for him that [wheat-] fattened calf! And the father said to him, Son, you are always with me, and all that is mine is yours. But it was fitting to make merry, to revel and feast and rejoice, for this brother of yours was dead and is alive again! He was lost and is found! (Luke 15:11-32 AMP).

May all fathers aspire to become like the father of the prodigal son. Happy Father’s Day to all and may the Lord God bless your aspirations and dreams for your children and your children’s children.