What’s in a Name? The Origins of Famous Brands 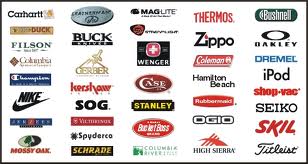 Here’s a very interesting article that I came across that I wanted to share to all of you….Enjoy…. (No copyright infringement intended!)

By: Allison Ford
Our lives are full of brand names and trademarked products that we use every day, from the Apple computer I turn on every morning to the bowl of Quaker oatmeal I eat for breakfast. At the birth of every company that makes a product we can’t live without, somebody trying to come up with a memorable and successful name was present. Many of us know that a real Ben and Jerry, Wendy, and Ford exist, but the funny-hatted man on my oatmeal box is a figment of the founders’ imagination, thought to evoke images of honesty and value. Although many brand names are simple acronyms or versions of their founders’ names, some of the companies we trust every day actually have fascinating—and surprising—back stories.
The right name is integral to a company’s success. No one would be interested in sipping a hot, steaming cup of Pequod coffee, and the Southland Ice Company didn’t hit the big time until it renamed itself after its new, extended operating hours: 7-Eleven.
A great origin story is just as crucial as a great product—one more thing that keeps customers guessing, wondering, and buying.
Posted by Aldrin Navo